This is a link for: Narutopedia 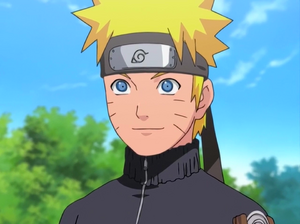 Naruto Uzumaki is a shinobi of Konohagakure. He became the jinchūriki of the Nine-Tails on the day of his birth — a fate that caused him to be shunned by most of
Konoha throughout his childhood.After joining Team Kakashi, Naruto worked hard to gain the village's acknowledgement all the while chasing his dream to become Hokage.
In the following years, through many hardships and ordeals, he became a capable ninja regarded as a hero both by the villagers, and soon after, the rest of the world, becoming
known as the Hero of the Hidden Leaf.He soon proved to be one of the main factors in winning the Fourth Shinobi World War, leading him to achieve his dream and become
the village's Seventh Hokage.

NaruHina is the term used to refer to the romantic relationship between Naruto Uzumaki and Hinata Hyūga.

Love of his life is Hinata Hyūga.
In their childhood days, Naruto first met Hinata Hyūga while they were preparing to enrol at the Academy.Despite not knowing her, Naruto refused to let the three bullies
insult Hinata and came to her defence, but he was outnumbered and knocked unconscious, and the bullies damaged his red scarf. When he awoke, Hinata thanked
Naruto for helping her and returned his scarf to him, but he let her keep it.Ever since then, Hinata developed a strong admiration towards Naruto, and because he
was treated as an outcast by almost everyone in the village, she found herself able to relate with his desire to be acknowledged. She was also amazed that despite having
nothing and no one to rely on, Naruto never gave up in believing he could become something great like Hokage. Inspired by his determination, Hinata decided to try her best
to become strong so she could be acknowledged as well, and adopted Naruto's nindō of never giving up. Her admiration for Naruto eventually grew into love.At the end they
got married and grew up their little family. They have two kids: